IVAN OCAMPO
TECHNOLOGY - RESEARCH - DESIGN ACTIVISM
Home TechnologyCoding Learn all about JSON files and how to use them.
CodingTechnology

Learn all about JSON files and how to use them.

JSON stands for JavaScript Object Notation. A JSON file has .json as its extension and the data inside are represented in a key:value pair, just like a traditional JavaScript object.

If you have worked with APIs during your programming journey, you likely know what JSON is, because a lot of API data now comes in JSON format.

If you have not worked with APIs before and you’re an absolute beginner, you’re not alone.

In this article, I’m going to walk you through what JSON is all about and how you can make the best use of it.

JSON can be defined in an object or an array, which might take in several objects. So, objects and arrays are automatically acceptable data types in JSON. Other data types that it supports are boolean, null, and string.

Data types such as undefined, function, and date are not supported by JSON.

In addition, JSON can also be extended into other data formats which might accept extra data types that raw JSON does not accept.

Examples of such extensions are GeoJSON and BSON. GeoJSON is used to represent Geographical data while BSON is used by the popular database service provider MongoDB.

BSON, for example, accepts regular expressions, dates, and timestamps as data types, which JSON does not accept.

JSON is very strict when it comes to its supported data types. If you have a linter installed in your code editor, it immediately lets you know there’s an error any time you input an unsupported data type or go against the syntax rules.

How JSON Data is Sent to the Client (Browser)

JSON was created out of the need to send data from the server (a database, for example) to the client (browsers) in real-time.

But JSON data can’t be transmitted to the browser in its raw key:value pair form, so programming languages have methods for manipulating JSON data.

In JavaScript, for example, JSON.parse() converts JSON data to objects and JSON.stringify() converts an object’s key:value pair to JSON data.

Python provides methods such as json.loads() for converting an existing string to JSON, and json.dumps() to convert an object to a JSON string.

You can send the data in the basic JSON syntax to the browser by using the two methods JavaScript provides.

How to Send JSON Data to the Client (Browser) with JavaScript

The JSON.stringify() method returns a JSON string that is exactly the same as a JavaScript object. You can use it in combination with DOM manipulation methods to display JSON data in the browser, as I have done in the code snippets below:

In the JavaScript code, we declared the JSON data as an object literal with the identifier (name) JSONData. We used JavaScript’s JSON.stringify() method to turn it into a string, and the DOM’s query selector method to get the empty div in the HTML. This makes it possible to populate the JSON data in it with the innerHTML DOM manipulation method.

We can use the JSON.parse() method to turn a JSON data to an object – and here it is in action:

The resulting output in the browser looks like this: 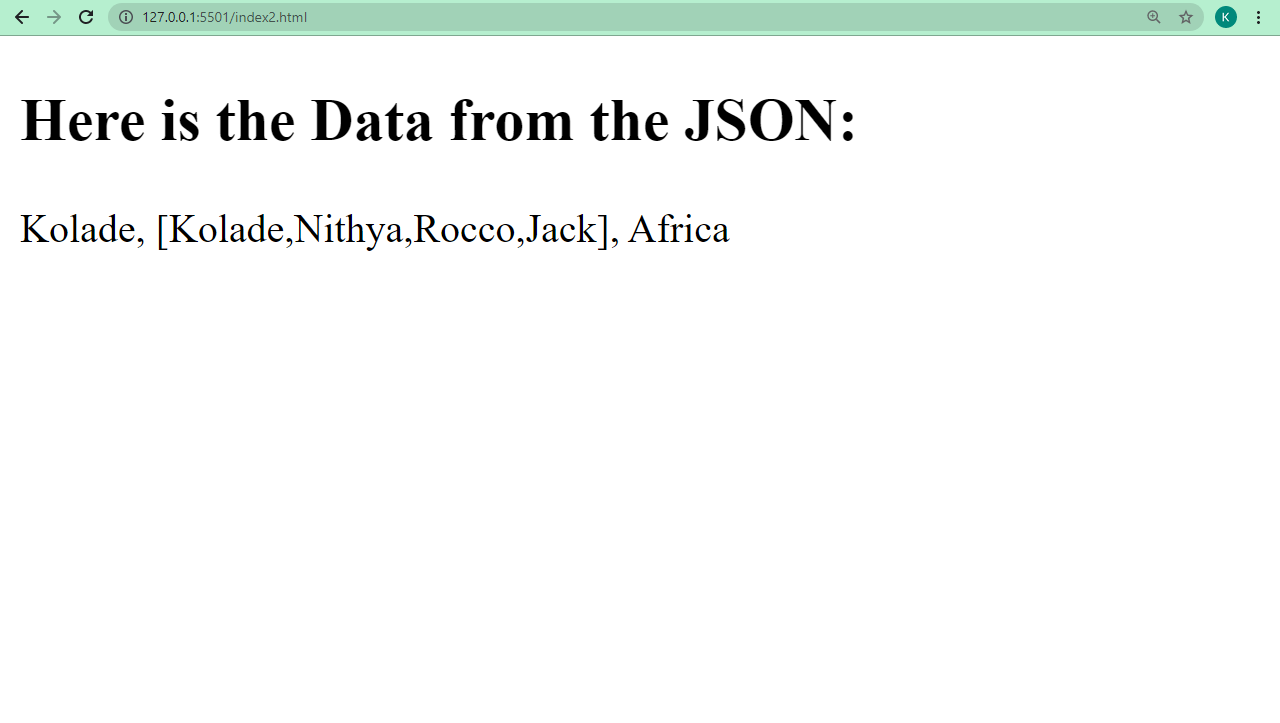 As a programmer, you can’t do without JSON. Most APIs are now written in JSON instead of XML.

JSON was initially intended for JavaScript, but a lot of other programming languages now support it thanks to its language-independent nature. As a result, many languages have libraries for working with it.

I hope this tutorial has given you the insights you need to work with JSON so you can put it into proper use any time you encounter it.

Thank you for reading, and keep coding.

How to use the Lambda Function in Python – Example Syntax

How to Insert a Checkbox in Microsoft Word

How to use the Lambda Function in Python...

The Metaverse Experiment: Experience is the next evolution

A deeper understanding of liminal spaces in the...

You can now kiss in the metaverse with...

Google Play Store now shows you how much...

@2022 - All Right Reserved. Designed and Developed by Ivan Ocampo