Raspberry Pi Project: Making a do not disturb sign

Building projects with my Raspberry Pi has been especially therapeutic during the last two years of lockdowns! In relevance to my research, I have found that there are times when family and work life collide. Indeed, I wrote a lot about the requirement to have a clear demarcation and liminal space between work life and personal life. Unfortunately, this is not always possible. Indeed, YouTube littered with videos of online meetings being hijacked by partners, parents, and pets. We can’t do much about your cat, but maybe a digital sign in your home office can let people know what you’re up to, and whether it’s okay to wander in.

In this story I’m going to create a digital do not disturb sign using a Raspberry Pi and Python. To do this, I will use a popular messaging protocol, MQTT (Message Queuing Telemetry Transport). With MQTT I will set up a simple do-not-disturb sign that you can trigger with a single key press and customise to your heart’s content.

We’re using two Raspberry Pi Zero W computers for this project, although it will work with any recent model. For both, we recommend installing Raspberry Pi OS Lite (magpi.cc/software) as we don’t need a desktop interface. Make sure both devices are working and connected to the same network. I recommend setting their host names by running sudo raspi-config at the command line, then going to System Options > Hostname. I chose ‘busybot’ for the sign and ‘buttonbot’ for the controller and that’s how we’ll refer to them throughout this tutorial. Finally, make sure everything is up-to-date. Enter these commands:

You should be able to ping one device from the other. On ‘busybot’ Raspberry Pi Zero W, enter:

You should should get a response from ‘buttonbot’ Raspberry Pi Zero W.

We’re going to set up the display first. Pimoroni’s Scroll pHAT HD is a display made up of 17×7 pixels (119 total) and comes with a Python library that does all the hard work of displaying and scrolling text for us. The pHAT form factor makes it just the right size for a display, but of course you can adopt this tutorial to any display you like. You’ll need to solder the 40-pin header to the display and also add a reciprocal header to ‘busybot’ Raspberry Pi if it doesn’t already have one. Before assembling them together, screw on the diffuser, which will make the display much easier to read. Now, with Raspberry Pi powered off, carefully connect the Scroll pHAT HD.

Step 3: Set up the display software

It’s time to make sure our display is working before we go any further. Fortunately, Pimoroni has created an install script for us. At the command line, run the following:

Make sure you do the ‘Full Install’ when the option is presented. This will set up Raspberry Pi so it can communicate with the display and install all the Python libraries we need. Take a look at Pimoroni’s GitHub (magpi.cc/scrollphatgit) for more information on installation.

Once the install has finished, we can test things out. Reboot, then try this on the command line:

See a pretty pattern? Then you’re ready to proceed. Have fun with the other examples in the directory; they’re a great source of inspiration.

Our buttonbot and busybot are going to need to talk to each other over the network. One of the easiest, and most popular, ways to do this is the MQTT protocol. It uses a pub/sub model (publisher / subscriber) to process messages. An MQTT server (the ‘broker’) receives messages from ‘publishers’ that are then transmitted to ‘subscribers’. These are organised by ‘topic’. The biggest advantage is that publishers don’t need to understand or even be aware of the subscribers, they just need to speak MQTT. Don’t worry if this is confusing; working through the tutorial will make things clearer.

For our system to work, you need an MQTT server (or ‘broker’) to handle the messages. This can be anywhere on your network, but for the purposes of the tutorial we’ll install it on the same ‘busybot’ Raspberry Pi driving the display. MQTT software tends to be very ‘lightweight’, so a Raspberry Pi Zero W can easily handle being the server as well as a publisher. Mosquitto is probably the most popular set of MQTT tools. Installation is straightforward, too. Enter this at the command line:

The broker will be automatically installed as a service and always be running in the background. We’ve also installed Paho, a popular Python library for implementing MQTT. 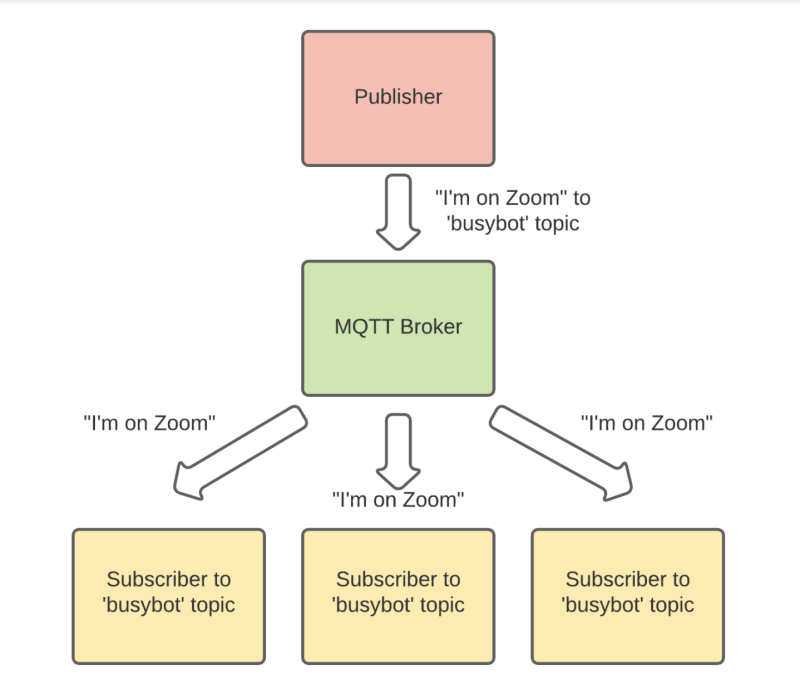 The MQTT protocol is perfect for Internet of Things projects

The code for this project does two main jobs: listens to the MQTT server for new messages, and then takes those messages and scrolls them on the display. You can enter the code shown here or get the files from magpi.cc/busybotgit. We need the code to be running all the time. To do this, create a new file from the command line:

Enter the code from busybot.service. (Change the paths if you’ve created the code elsewhere.) Save the file (CTRL+X and then Y), then enter these commands:

Let’s confirm that the code is working. Using the Paho MQTT libraries, the code subscribes to the MQTT topic ‘busybot’ on the broker. Whenever anything publishes a line of text to that topic, busybot will be notified, the text delivered and then displayed. We can check everything is working using the Mosquitto command line publishing tool:

If you see the messages scrolling across, then everything is working. Send any message you wish, or a blank space to clear the display. 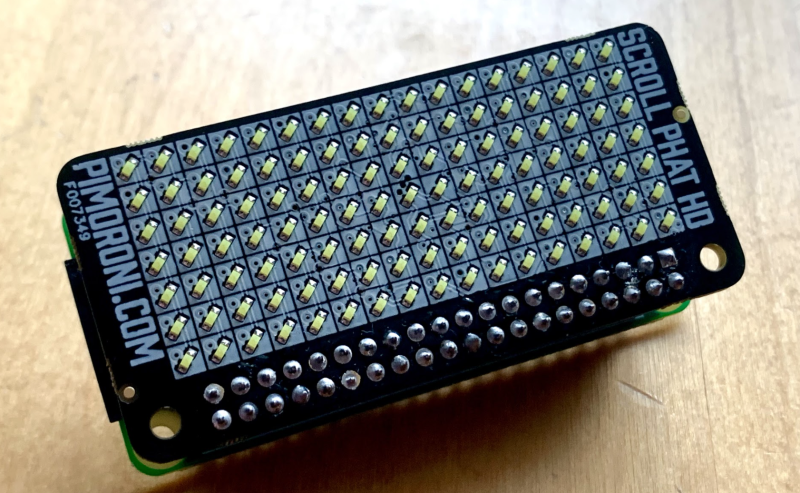 The Scroll pHAT HD without its diffuser. 119 very bright LEDs

Now we have our display working, it’s time to turn our attention to sending the messages. MQTT is widely supported and you can get clients for almost every platform and programming language in common use. That means we can send messages to the display from pretty much anywhere. In this tutorial, we’re going to use Pimoroni’s Keybow interface to provide a quick way of setting messages. On the second ‘buttonbot’ Raspberry Pi WH, assemble the Keybow as instructed at magpi.cc/assemblekeybowmini, but don’t install Keybow OS – we’re sticking with Raspberry Pi OS Lite.

We’ll now add some code to send messages to the MQTT broker when buttons are pressed. First, from the command line, we need to install some dependencies on buttonbot:

Now get the code from GitHub:

We can now test the Keybow with a simple example:

Press the keys. Do they all light up? Then all is well.

In the busybot directory, have a look at buttonbot.py. You’ll also need to change the name of the MQTT broker and/or topic if you’ve used something different.

We need to make sure the code is always running, just like busybot. Again, we’ll create a service to do this. From buttonbot’s command line, go through the process in Step 6 to create a service file and enable it. Just make sure you change the

Save the file and enable it as before.

Everything should now be ready. With both Raspberry Pi Zero computers running, try pressing a key on the Keybow. A message will now scroll across the display on the other Raspberry Pi Zero. Make sure all three keys work. You’re now ready to start customising the system to your own needs. If you edit buttonbot.py, you’ll see some documented options for changing the messages and the colours of the keys. Free free to experiment, make changes and make this code your own. If you need more than three messages, see if you can alter the code to support key press combinations, which would give you up to seven options.

As the display doesn’t ‘know’ about buttonbot’s existence, it means that anything capable of speaking MQTT can send messages to busybot to set the scrolling text. It could be done from the command line or when a certain event happens. If you’ve been following the Home Assistant (HA) series in The MagPi magazine, then you may be interested to know that HA speaks MQTT, so the display could be tied to a temperature or motion sensor. Have fun dreaming up new ideas for your display.

Windows 11: Everything you need to know about when it’s coming, what it is, how to install it, and why you need it.

How to Insert a Checkbox in Microsoft Word

Learn all about JSON files and how to...

How to use the Lambda Function in Python...

The Metaverse Experiment: Experience is the next evolution

A deeper understanding of liminal spaces in the...

You can now kiss in the metaverse with...

Google Play Store now shows you how much...

@2022 - All Right Reserved. Designed and Developed by Ivan Ocampo